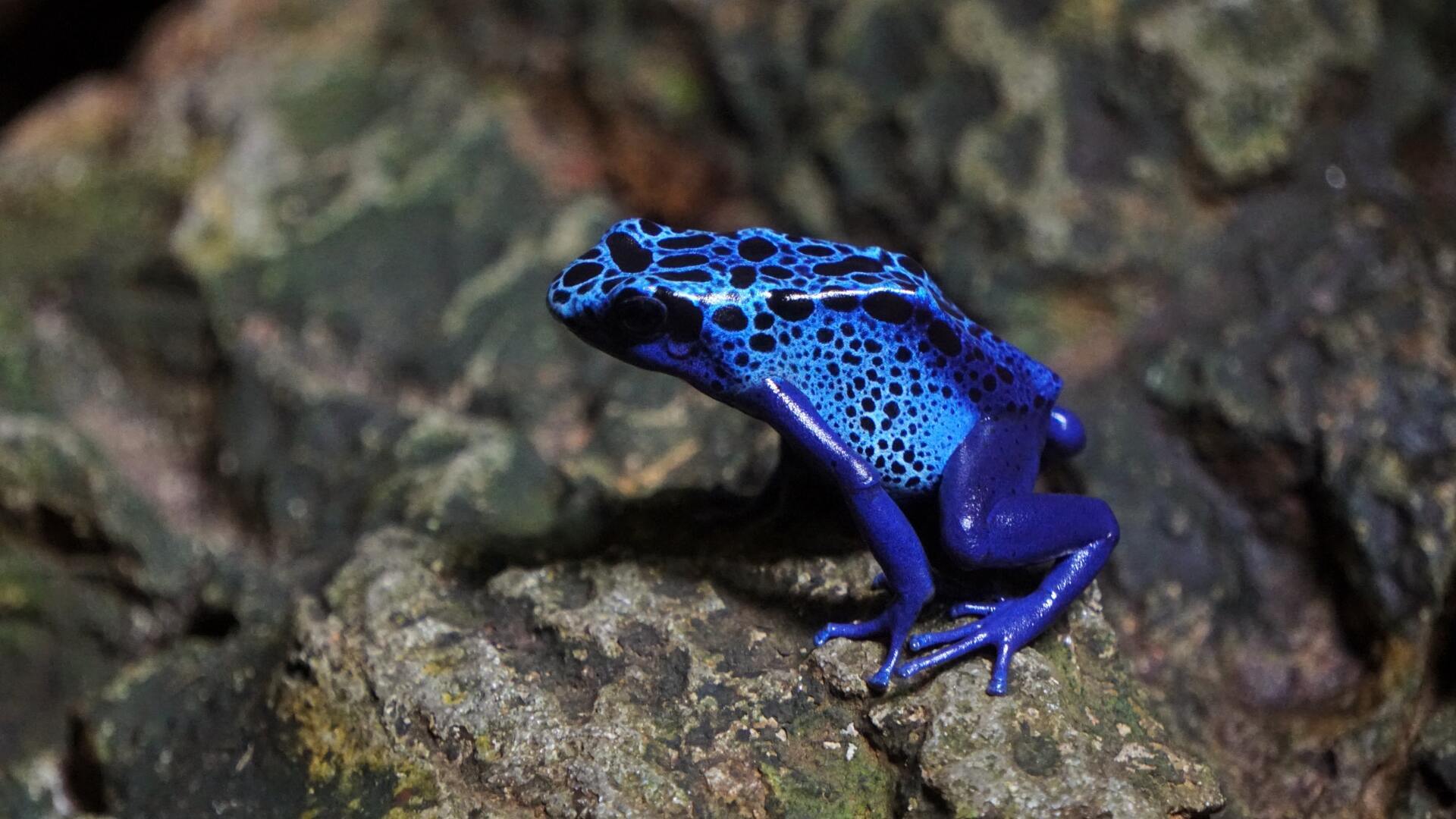 Everything poops, even frogs. What is their waste supposed to look like? Learn the details of the poop here!

Frog poop is surprisingly large in comparison to a frog’s size. The waste itself is similar in appearance to some other vertebrates- cylindrical in shape, brown or black in color, shiny before drying. The frog’s diet and general health can often be determined from the quality of the droppings.

Keeping frogs isn’t always a clean job as they have very active digestive systems. This means two things: that frogs eat a lot of food, and frogs make a lot of waste product. This waste product, what we commonly call poop, is surprisingly large in size compared to the frog itself. These animals cannot intuitively regulate their appetites, so they fill their stomachs whenever given the opportunity. When a frog digests a large meal, it does so quickly and efficiently- leaving behind plenty of poo.

How Much Do Frogs Poo?

Don’t worry if you’re a new keeper and find what seems to be an abnormally large pile of waste in your frog’s enclosure-it doesn’t mean your frog is sick. Although alarming, substantial production of waste is a good sign that the frog’s digestive system is hard at work. Amphibians have sensitive temperaments and that includes their stomachs, so it’s important that a frog’s intestines never stop. Keeping your frog on a feeding schedule can help keep its gut in good health and the frog happy.

The volume of poop is determined by the size of the frog and how much it eats. The amount of waste produced at one time can account for up to 30% of the frog’s size. This means the size of an average garden frog’s waste can be around the size of a large coin. When it comes to amount in captivity, a keeper has nothing to fear as long as the quality of the poop is good and the frog is eating well.

An average land-dwelling frog will poop around 2-5 times for every time it eats. This is not a rule as much as it is a guideline, and something to look out for to be sure your frog is healthy. Watery stool or overly frequent stool (diarrhea) is sometimes the only visible indication of illness in a frog, so try to monitor their waste production.

Why Does Frog Poop Matter?

The general health of a frog cannot be determined from examining its stool alone, but the waste produced can provide some information in the event a frog falls ill. If a frog is showing signs of gastrointestinal distress (digestive troubles) the first place to find information would be in the frog’s poop- from there we can find out what it ate last, how well it’s digesting, if it ate something it shouldn’t have, or if the frog is at risk of becoming dehydrated. Frogs can’t tell us what’s wrong, so it’s up to us to figure it out using the clues they leave for us.

When researching frogs in the wild or in a lab setting, scientists inspect the waste product to help determine how the ecosystem and diet influence overall health. For example, if there’s an abundance of parasites in multiple waste samples it could be an indication there’s a problem with the food or water supply of the tested population. Since frogs are ideal test subjects in many lab settings, being able to identify how a factor effects their poo is extremely valuable.

The color and general appearance of the stool can vary according to the frog’s health and diet.  Most of the time it’s brown, black, or somewhere in between. A diet consisting mostly of dry insects (like crickets) usually results in the frog’s poop being lighter in color, on the brown side. A darker stool, sometimes black, is often times indicative that a frog’s diet is predominately that of earthworms or other heartier prey.

Not all frogs produce the same stool, so it’s important to know how the diet and health of the frog impacts the appearance of a frog’s waste. Some frogs that eat more substantial prey can produce heavy, large poop in comparison to the lighter and less dense waste of a smaller frog. Since food inevitably become waste, it’s important to feed the animal foods that will help it produce easy and healthy stool. The kind of frog and the age/size of the frog should be taken into account when crafting a frog’s diet and should not just be what’s most readily available- variety plays an important role in overall nutrition.

When discussing the characteristics of waste in regards to health, it’s often requested to rate the quality of the stool. This is in reference to a few factors, but the most important is the consistency. The waste should not be powdery or liquid. The stool should hold its shape. Watery poo or diarrhea is sometimes the only indication of illness- you should get your pet to the veterinarian immediately if you notice it. Dehydration caused by diarrhea can cause your frog to deteriorate very quickly if not treated in a timely manner.

Where Frog Poop Comes From

We now know that frogs poop a very large amount for their size- but does it hurt them to do so? Well, no. Frogs have adapted to this and do not feel pain when they go to the bathroom. Frogs, reptiles, birds, and some other animals have a body part called a cloaca. A cloaca is the single hole on the rear of the frog that excretes urine and waste as well as eggs or sperm. The digestive process begins in the mouth, and frogs have many adaptations starting there that allow for the complex process of digestion to occur so quickly and efficiently. From their tongues to their saliva, stomach to bowel, each part of the system helps the next step to happen down the line- until the food ultimately exits as stool.

The Dirty Facts About Frog Poop

As cute and friendly as most frogs are, they do carry with them a couple of risks. The biggest one by far is the risk of infection spreading from pet to handler. This transfer of bacteria parasites, or illness is possible through handling the frog directly, handling the frog’s waste, or contact with the animal’s environment. Salmonella is found in many frogs, turtles, and lizards- it’s a bacterium that’s easily transmitted and can be deadly to humans if serious symptoms are not treated. Parasites can be found in poo of an infected frog as well, so keep an eye on your frog’s waste to catch them early. It’s important to thoroughly wash after handling frogs and toads to make sure you don’t become infected with any pathogens.

Frogs make surprisingly large waste, up to 30% of their total size, and for good reason. They have highly active digestive systems which means they eat a large amount and poop a large amount.

This poop starts as food, moves through the digestive system where it’s absorbed into the frog’s body, and exits the cloaca as black or brown cylindrical poo.

It’s important that frogs are offered an appropriate diet to ensure they have their nutritional needs met and the healthiest stool possible. Frog poo can contain salmonella or other bacteria, so be careful when handling frogs and their waste.

Hi! I’m Katie, an animal keeper from the United States. I have been caring for turtles, tortoises, amphibians, and other species for over 15 years. This is my rescued Sulcatta Tortoise, named Reggie.