Skip to content
Home › Dogs › What Do Dogs See? 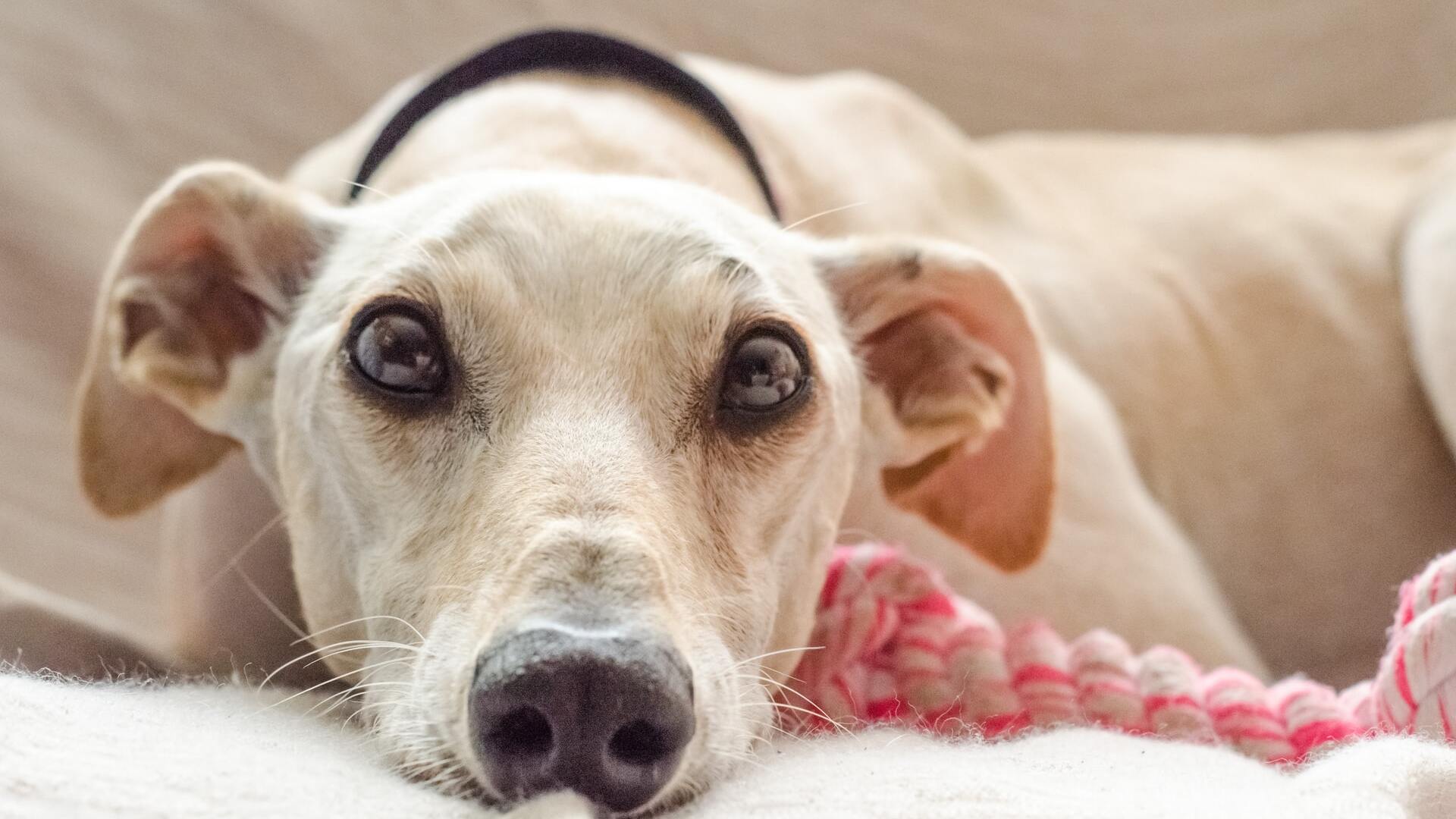 Is it true that dogs only see in black and white? And can your dog see you coming from far away? This will be the topic of this post.

Dogs see a lot more than people think. The human eye has three types of cones that discern see red, blue, and green (RGB), but a dogs’ vision is very different from ours, they have two types of cones, and can discern blue and yellow, also known as dichromatic vision.

Below, I’ll explain what determines your dog’s vision as well as all the ways in which their vision is different from ours. It should help you to better understand how your puppy sees the world.

What Determines a Dog’s Vision?

A dog’s vision, just like our vision, is determined by the retina. If we want to understand what dogs see we have to understand how their retinas work.

There are two major components to the retina that determine what dogs and humans see: The rods and the cones.

Rods: Determines the ability to see with low-light and degree of sensitivity to movement.

The fundamental difference between humans and dogs’ retinas is the number of rods and cones in each one.

On one hand, dogs have a larger number of rods which means they have much better night vision than humans and are much better at catching movement from far away.

On the other hand, dogs have fewer cones than humans do which means that they are less able to distinguish between colors. They do, however, see more than black and white, for sure.

Differences Between What Dogs and Humans See

Now what exactly do dogs see and how is it different from what we see? The five main differences between dogs and humans visions are:

As we already know, dogs see fewer colors than humans. But how many colors do they actually see and what are they?

Dogs can only perceive a combination of three tones: yellow, blue, and grey. Bright yellow and blue are the colors they see more clearly.

Any color outside of these tones, though, will come across as a different shade or will be undetectable to them altogether. For example, unlike humans, dogs can’t see red and green or any combination of these two colors.

Unfortunately for us, our puppies can’t explain to us what they see, so we will never know exactly how certain objects seem to them or how they perceive the world around them.

The funny thing is that, actually, a dog’s vision is very similar to the vision of a red and green color-blind human. So, if you happen to know any color-blind people, they might be able to help you understand your dog’s vision a little better, at least when it comes to color.

Dogs can easily detect movement from far away.

As we know, many dog breeds were designed to be hunters. Because of this they’ve developed the ability to catch movement from a great distance so they could spot their prey.

This means that if you’re coming up to your dog and you wave at it from a distance, your puppy will be able to see that. It just won’t be able to tell it’s you who’s waving until you get much closer.

Depth and Angle of Vision

Depth perception is the ability to calculate how far away an object is.

Each of our eyes sees things slightly differently because their angle of vision is different. Our brain can piece together the information it receives from both eyes and turn it into one clear image.

If your depth perception is a little off, and this can happen to humans for several reasons, it can affect your ability to judge the distance between objects.

Here’s a quick example: Imagine you’re trying to pour yourself a glass of water but your depth perception is off and you misjudge how far away the bottle is from the glass. You’ll end up spilling water everywhere.

What this essentially means is that even though dogs are good at catching movement from far away, they are basically nearsighted and will not be able to recognize the person moving until they get close enough so that dogs can either sense a familiar smell or catch a particular movement that they can associate with that person.

As we already know, dogs’ eyes are further apart which extends their angle of vision and gives them much more peripheral vision than what we have.

This means, of course, that they are much more aware of what’s happening around them at all times.

Thanks to the larger number of rods on dogs’ retinas, they are much better than us at detecting movement in the dark or in low-light.

You may have noticed your puppy’s eyes shining in the dark. That’s their retina’s way of reflecting back the light that the eye captures so that dogs can see better in low-light environments.

Even if they don’t see very clearly what’s moving, they will be able to easily detect that movement, which is one of the reasons dogs are such good guards and why you can always count on them for protection.

The Importance of What Dogs See

It’s not only fun to understand our dogs better but it’s also important that we do so we can help them live their best lives possible.

Small things like which toys you buy for your puppy or the color of its bed may not have seemed important before, but now that you understand a little more about how your fur baby sees the world around it, you can use this knowledge to help it.

For example, when you’re picking out a toy for your dog, try to stay away from green and red toys that your puppy will have a harder time being able to locate. Instead, opt for bright yellow or blue toys.

And if your dog gets startled but a plastic bag blowing in the wind, know that this is normal because your puppy will be able to see that something is moving but not be able to understand what it is.

And don’t forget that your dog will be your best friend and protector at night when you go on walks in the dark.

Now we know that dogs seeing only in black and white is nothing more than a myth. They do see fewer colors than we do but are still able to recognize a few colors.

But don’t feel bad for them because even though they lose to us in the color department, they are much better than us at seeing in the dark, as well as detecting movement, and have a wider angle of vision that significantly expands their peripheral vision.

So, to answer the question “What do dogs see?”: They see a whole lot.

My name is Maria, I’m 26 years old and I’m from Portugal. I’m hoping to use my Management and Digital Marketing background to open a Dog Daycare, so my dog and I can spend our days around other dogs.