Skip to content
Home › Dogs › What Colors Are Labradoodles? 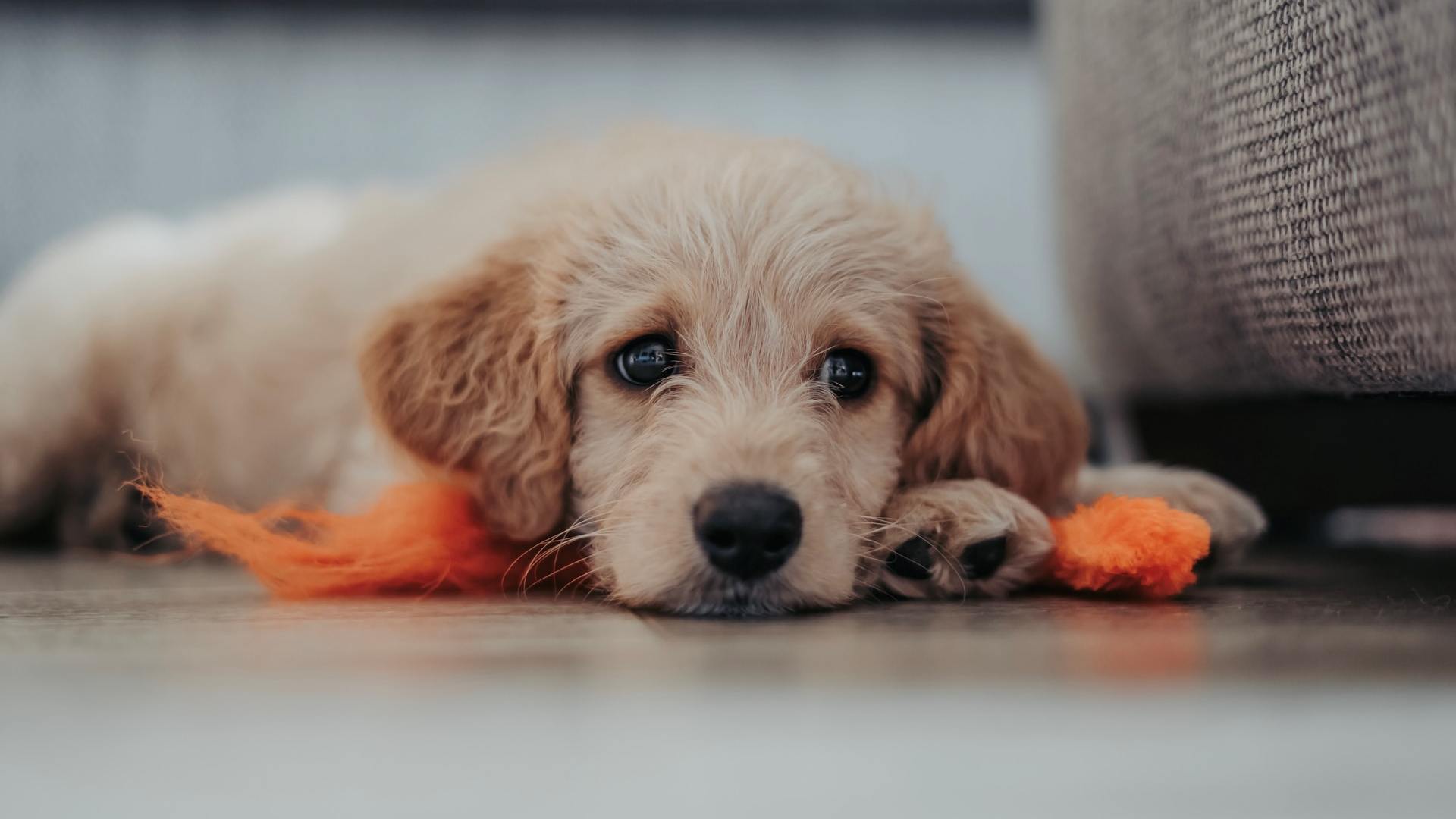 When getting your Labradoodle puppy, what color and pattern can you expect it to be? And is it always possible to tell? Get your answer here!

The Labradoodle can be found in twelve different colors. The basic colors are silver, red, black, brown (chocolate), and golden (apricot). The following available colors stem from these basic colors: cream, chalk, blue, caramel, parchment, lavender, and café. Besides these colors, Labradoodles can also be found in parti and phantom.

But along these twelve accepted colors, there are lots of varieties in Labradoodle colors. This will be covered in the rest of the article. As well as two color patterns found in the Labradoodle and how you will have the best chance of knowing what color you will end up with. Lastly, I will discuss a known health risk that arises from breeding a specific color pattern, the merle Labradoodle.

So Many Different Colors

It is not a rare phenomenon for your Labradoodle pup to turn lighter with age. But with Labradoodles, it isn’t always a simple case of your dog getting lighter. Some Labradoodles will turn from black into silver or blue, for example, or from chocolate to parchment. These color transformations can’t always be predicted and often occur before your pooch has turned three years old. Therefore, it’s wise to go for a Labradoodle when you have fallen in love with the personality and characteristics of the breed. Opposed to a passion for a specific colored Doodle.

The reason for the big variation in color has to do with the two breeds standing at the base of the mix, the Labrador and the Poodle. A Labrador has three colors that are accepted by the breed standard, while a Poodle has 10 different colors that are accepted. Combining these two leaves room for a lot of variation. But as with any breed of dog, Labradoodles are mostly bred after popular demand. This results in the most common colors being brown, black, and white as these are the most popular.

What Are Parti and Phantom?

There are two other color varieties of the labradoodle that deserve being mentioned. These are the parti and the phantom variation.

The parti labradoodle is a combination of two different colors. The base color is always white. This means that for a labradoodle to be part-colored at least fifty percent of it should be white. The other color will occur in blots over the dog’s body and is often apricot or brown. Preferably the markings in the dog’s face are symmetrical, but any type of marking is accepted.

Phantom colored Labradoodles are also multi-colored. Unlike the parti, there are no rules for the specific colors that need to appear in the dog’s coat. It should, however, be largely one color, while the other color or colors appear in specific places on the body. The markings on a phantom labradoodle appear around the eyes, the side of its snout, on the throat and chest, under the tail, and on the paws. For it to be accepted as a phantom Labradoodle, it may, at most, lack one of these markings. This makes the phantom a very rare coloration.

What Color Will I End up With?

When picking your puppy with the intent for it to become your lifelong friend, you will want to have an indication of its future looks. But as discussed throughout the article, it’s hard to know what you will end up with. Does this mean there is no way for you to know if your pooch is going to look even slightly the same as when you brought it home?

Dogs are still a product of their genetic information. This means that the more that is known about your future companion, the more accurately a prediction can be made about its coloration. In most cases, the first generation of Labradoodles, the F1, can have lots of variation in one litter. This can be size-wise, in the shape of their face and body, and coloration. If you are all about the looks, an F1 Labradoodle might not be the right fit for you.

To be more sure about the future appearance of your pup, it is better to look for a later generation Labradoodle. These are often bred on color and shape. The breeder will be able to tell you what coloration they are producing them for, and in later generations, there are fewer different colored puppies in a litter. The more a breeder knows about the bloodline of their pups, the more likely it is that they can tell you what you are going to end up with.

Contacting a reputable breeder is upping your chances of knowing what you’re getting. While it’s never recommended to try your luck with a backyard breeder, in this case, likely, they will not be able to give you the information you are looking for either.

Merle, like parti and phantom, is more a color pattern than a real color. The merle gene causes lighter patches in a dog’s fur, resulting in a pattern with darker and lighter colors. However, these merle Labradoodles aren’t recognized by all breed associations. While a merle Labradoodle doesn’t come with health issues related to the merle gene, a little warning about the double merle is in place.

Double merle Labradoodles, as with every double merle dog, can develop deafness and blindness. In most cases, this is so severe that you will notice right away when visiting a litter. It can, however, be less obvious, so it’s best to steer clear of double merle altogether. These double merles are fully white or have some gray patches on a white fur.

While breeding double merle pups is not allowed, you could still stumble across one of these litters by accident. The crossing of the merle gene can happen by accident, either with accidental litters or when one of the parents isn’t showing the merle coloration. Knowing about the dangers of this merle x merle combination could prevent you from bringing home an unhealthy dog.

You could try to avoid buying a Labradoodle with the expectation of it being black and eventually ending up with a silver Labradoodle as much as possible. To do so, it’s advised to seek out a reputable breeder with proper knowledge about the breed and the coloration of your pup’s bloodline.

If you don’t care about the coloration of your Labradoodle, the only color-related danger to look out for is the double merle Labradoodle. A reputable breeder will not be breeding them. However, when looking at an accidental litter in someone’s home, it’s best to be cautious.

Hi! My name is Joan. I’m 25 years old, and I live in The Netherlands. I work in healthcare and study applied psychology. Besides this, I am helping my dog Chester recover from a bad start in life.