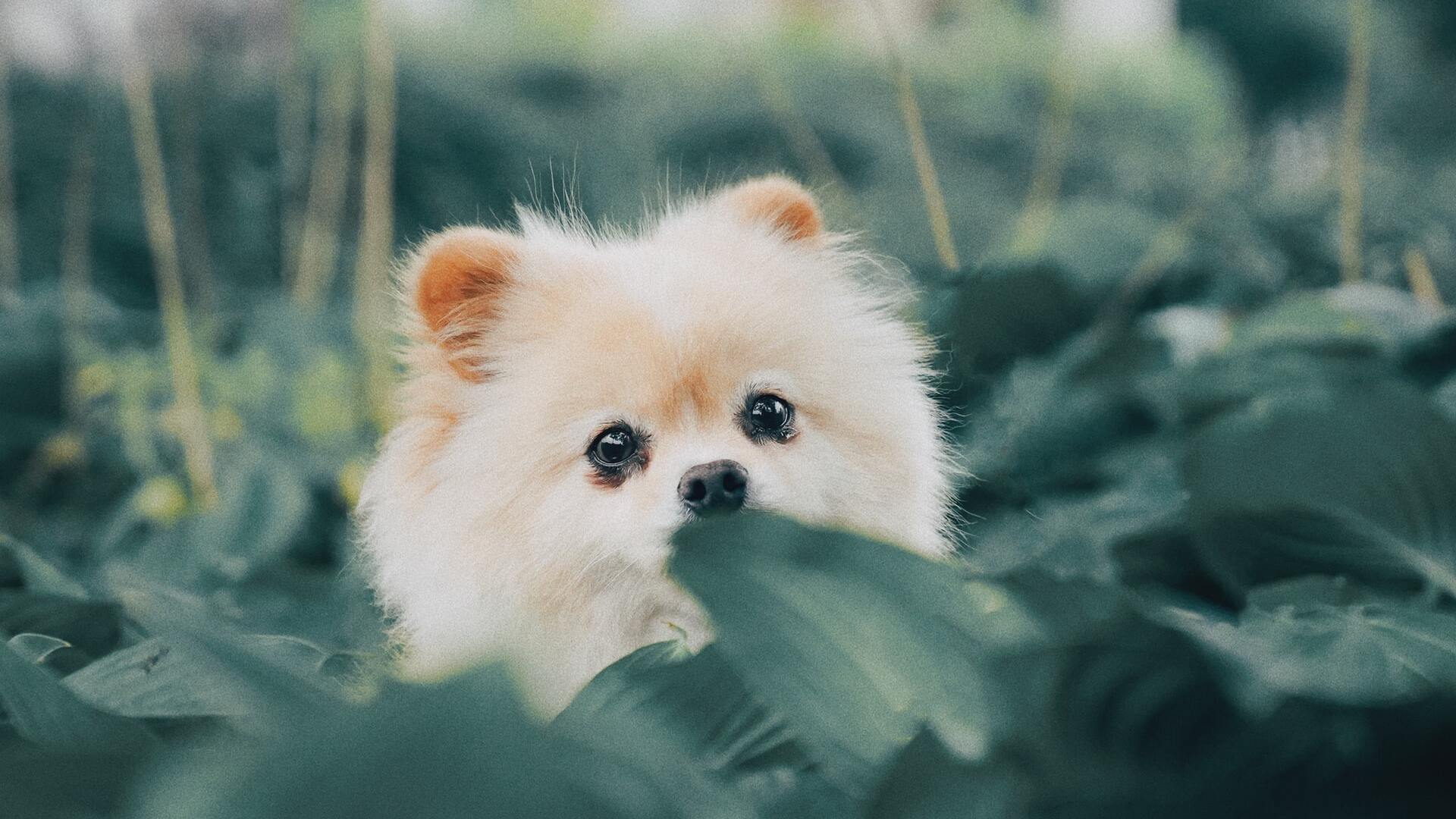 Thinking of adding a furry member to your family? Don’t have a lot of space? Here are some white dog breeds that are small and cuddly!

These are the most popular small white dog breeds:

As you read on, you’ll learn about the 10 dogs mentioned above in detail – their weight, height, and personality traits. Many of these dogs are considered toy dog breeds because of their small size. They have minimal grooming needs and you can take them with you wherever you go. The best thing about having a small dog is that you’ll never feel unloved because these dogs are always eager to please their owners.

Named after the city of Tulear in Madagascar, this small furry pooch will always keep you and your heart warm with its soft hair and large, adorable eyes. The standard height of the Coton du Tulear is 23-33 cm (or 9-13 inches) and the male weighs between 6-8 kg (13-18 lb) while the female can weigh anywhere between 3.5-5 kg.

They’re a hypoallergenic breed and they don’t shed, so they’re perfect for people who have allergies and don’t want to deal with a lot of dog hair. You do have to brush them almost every day, though, to avoid the hair from getting tangled.

An interesting fact about this breed – its ancestors can be traced to a group of small white dogs that swam all the way to the island of Madagascar after a shipwreck. One of their most prominent, and perhaps unique, features is that they don’t have a “doggie smell”. They’re usually shy and quiet but can make a lot of sounds when they’re having fun.

The Japanese Spitz was born in the 1920s when other Spitz breeds from different parts of the world were crossbred. The first Spitz that was seen at a dog show in Japan was a white German Spitz that came to Japan from China. They’re great for children and older people because they make good watchdogs. They enjoy spending time with their owner and require a lot of love and attention.

Thanks to their double coat, they can handle extreme temperatures easily, but because they’re a companion dog, they like being inside the house with their human. They have a thick coat that requires regular brushing (twice a week).

The Pomeranian is known as a toy dog breed because of its small size. They weigh about 1.3-3.1 kgs (3-7 lb) and their height is between 20-36 cm (8-14 inches). They are descendants of the larger-sized German Spitz and are, therefore, members of the Spitz dog family.

In the late 19th century, Queen Victoria adopted a red Pomeranian which caused them to become popular. Today, some of the most common colors are white, black, and orange.

Pomeranians are usually friendly but can be aggressive around other people and animals. They can be territorial and will bark if they hear unfamiliar sounds and see faces they don’t recognize entering their space. They’re highly receptive to training and when trained properly, they enjoy socializing.

Just like the Japanese Spitz, the Pomeranian is also an excellent choice for seniors and children because they have very little exercising and grooming needs. You can easily travel with Pomeranians because of how small they are! Well, that’s true about all of the dogs on this list, but these dogs will fit just about anywhere because of their small size.

Known for their floppy ears and long, silky coat, the Havanese is considered one of the best companion dogs. They’re active and energetic, but they don’t like being alone. If you leave them alone for a long period of time, they’re going to get restless because this dog loves to socialize.

The Havanese has a habit of getting too attached to their owner. It doesn’t require as much exercise as other breeds, but you still have to walk your Havanese every day. The Havanese is the national dog of Cuba and is a descendant of the now-extinct Blanquito and some other dogs of the Bichon type.

The French Bulldog is a personal favorite of mine. These dogs are so friendly you won’t go a single day without feeling lonely if you have them by your side. The Frenchie is a descendant of Toy Bulldogs from England and ratters from France. They’re 28-30 cm (11-12 inches), with the males weighing anywhere between 9 and 12 kg (20-28 lb) and the females, 7-11 kg (16-24 lb).

The Frenchie does have a few problems, though. While you have to walk them every day just like any other breed, they shouldn’t be involved in strenuous exercises because they can develop breathing problems. They’re also susceptible to obesity (which can lead to other problems), but they’ll be fine as long as you don’t skip the daily walks.

The best thing about having a Frenchie is that they’ll always keep you entertained! They hardly ever make a sound and they love to cuddle with their owner. Another good thing about them is that they won’t give you a lot of trouble when you’re training them thanks to their people-pleasing nature.

If you frequent dog-related blogs, you’ll notice that the Bolognese is usually listed as a dog that doesn’t shed, which, in a way is true, but their hair falls the same way ours does. You have to brush them every day and give them baths regularly.

The Bolognese is a playful and loyal doggy. It has high receptivity to training and loves nothing more than being close (physically and emotionally) to its owner. Usually shy around strangers, but their demeanor tends to shift depending on how their owner behaves around the person. They’re loving creatures and if you need a furry friend who’ll keep you company all the time, then the Bolognese will be perfect for you as it tends to follow its owner no matter where they go.

The Maltese is another dog breed that belongs to the family of Spitz type dogs. There’s not much known about the history of this breed. In fact, we don’t even know why it’s called “Maltese” because it doesn’t have any connection to the island of Malta. What we do know is that these dogs have been around for a very long time, as they were a favorite among ancient Greeks and Romans.

Male Maltese dogs are usually 21 and 25 cm (8-10 inches) tall and females are 20-23 cm (7.87-9.05 inches). Adult Maltese weigh 3-4 kg (6.6-8.8 lb). The Maltese has a pure white color and a dense, silky coat that doesn’t have any curls. It’s common for people to trim the coat short by just a few centimeters. Sometimes, because of health issues, Maltese dogs show signs of tear staining.

Regular grooming is required in order to keep the corded coat clean. In adult Pulis, the cords can grow so long they’ll reach the ground. You can trim the coat short, but keep in mind that their long cords are one of the major reasons why people buy Pulis in the first place.

Pulis are energetic and active, and thus, require a large space where they can freely roam around. They require daily exercise and usually don’t prefer to stay indoors for very long. They’re sensitive little pooches, so make sure you don’t ever yell at them if they don’t listen to you.

The Bichon Frise is about 23-30 cm (9-12 inches) in height at the withers and weighs 5-10 kgs (10-29 lbs). It has a long, curly tail and a dense coat that doesn’t shed much. These dogs found their way into France from one of Spain’s Canary Islands called Tenerife. They gained popularity in France during the Renaissance period and by the late 19th century, they had come to be known as the “common dog”.

According to the American Kennel Club, the Bichon Frise is a “merry” and “curious” dog. They’re intelligent and get along well with other people and animals. However, they do have a tendency to become territorial.

They have to be groomed every month. Sometimes they have hair growing in their ear canals that has to be removed regularly, otherwise, the ears can become a breeding ground for bacteria and moisture. The Bichon Frise is a hypoallergenic breed and is perfectly safe for people with allergies. They’re prone to skin conditions because of their habit of chewing themselves during the summer so that’s something you’ll have to keep an eye on.

Chihuahuas take the crown for being the smallest dog breed in the world. There’s no standard height for the Chihuahua, but it’s usually between 15 and 23 cm (6-9 inches). As for their weight, Chihuahuas don’t weigh more than 3 kgs (6.61 lbs).

They can be found in a lot of different colors, but the most common ones are white, black, brown, and chocolate. Because of how small they are, you can easily take them everywhere with you. It’s not uncommon to see people carrying them around in tote bags.

They have a tendency to be distant around strangers, so if you have kids in your house, you shouldn’t encourage rough play between them and your Chihuahua. They take some time to warm up to new people. Chihuahuas are spirited little creatures and sometimes they forget how small they are because of which they can try to fight back against a larger aggressive dog. Make sure you keep a close eye on them if you have a large dog in your house.

I have never owned any of the dogs on this list, but I know that every single one of them is adorable and will make a great addition to your family. Having a small dog that doesn’t need too much grooming or exercise is perfect for kids or seniors who don’t want to spend all of their time worrying about their pet.

Most of these dogs are so small you can carry them in tote bags wherever you go. Having a small dog breed comes with its own set of problems and challenges, though, so don’t think you won’t have to put in a lot of work to take care of them. They look adorable, but many of them can get hyperactive.

These dogs love being near their owners. Some of them, like the French Bulldog, can develop separation anxiety and become depressed if they’re left alone for too long, so you’ll have to spend a lot of time cuddling your dog. With that being said, they won’t give you too much trouble and you’ll be happy no matter which dog you decide to buy!