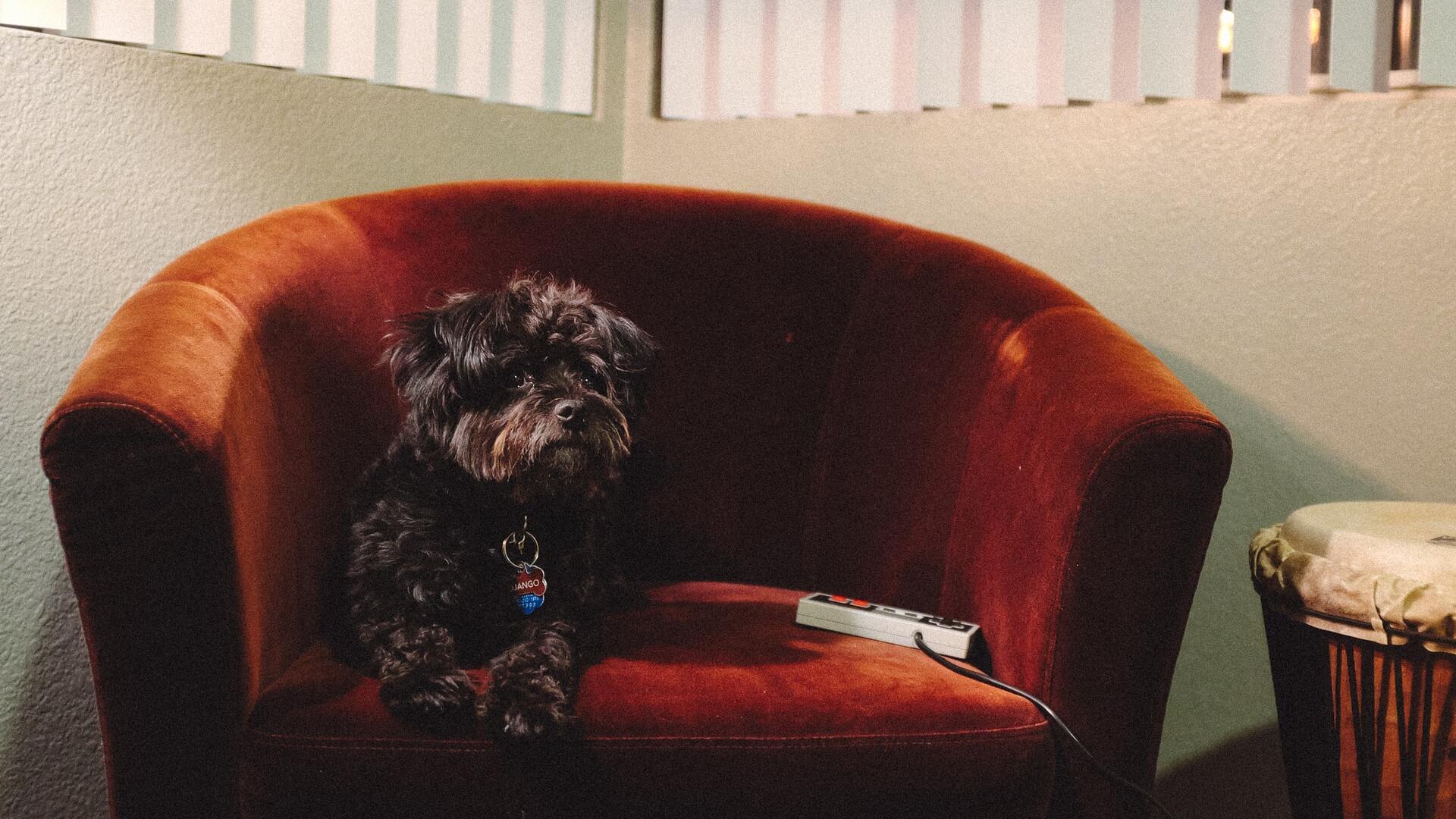 If you’re a senior who is looking for a small dog, you’re in the right place! Here’s a list of small dogs that are obedient and well-trained.

Here is a list of suitable small dog breeds for seniors:

In this article, I will explain the qualities of the dogs listed above and why they’re a good match for seniors. You can figure out which one you should get either for yourself or for someone you know. Small dogs are easy to carry, so you can travel with them without much hassle. When you’re getting on in years, it’s only natural to seek the love and warmth of a canine friend. Let’s take a look at the dogs listed above in detail.

The Bichon Frise is soft, cuddly, and tiny, weighing about 7 pounds. They have a hypoallergenic coat and adorably large eyes that will melt your heart. They’re easy to train, and they’re always ready to please their owners, so you’ll never be sad with them around.

They get along well with other dogs. They don’t bark much, so if you live with other people and have kids visiting you, you won’t have to worry about your Bichon Frise misbehaving around them.

They’re active and have a lot of energy, so you can take them with you to any activity you like. Another good thing about them is that they don’t require too much grooming, so you’ll only be paying a visit to the groomer once a month. They have a reputation for being friendly and affectionate, and they have minimal exercising needs, so you won’t have to move around too much.

Weighing about 24 pounds, the Pembroke Welsh Corgi is a small to medium-sized dog that can be easily carried and doesn’t require too much energy to train. They’re smart, and they have adorable little chunky legs that will make you smile as you watch them run towards you.

Corgis have historically been used as cattle herding dogs. They’re usually referred to as “heelers” because of their habit of nipping larger animals on the legs to make sure they don’t stop moving. Because of their herding nature, they require a moderate amount of exercise, and you’ll have to take your Corgi on a walk every day.

Similar to the Bichon Frise, the Pembroke Welsh Corgi also has minimal grooming needs. They’re perfect for seniors who are a little active because they’re not as light as the Bichon Frise, and they will require you to move around a little. If you want to stay fit and healthy, then you should get a Corgi.

The “Yorkie” weighs about 10 pounds, so they’re much lighter than the Pembroke Welsh Corgi, and they’re just as friendly as the Bichon Frise. They will do anything to please their owners. They’re highly intelligent, so you can easily train them by giving them treats. Their hair is similar to human hair, so grooming isn’t going to be much of a problem with them. They’re hypoallergenic, and they don’t shed as much as other dogs, so they’re great for seniors who have allergies.

The Yorkshire Terrier is loyal, affectionate, and maybe a little overprotective. If you live alone in an apartment, then you can rest assured that you will feel safe if you’re living with this dog in your house. Yorkies don’t take kindly to other animals, so if you already have a canine companion living with you, there’s a good chance they won’t get along with each other.

Pugs are amicable little furry creatures who are highly affectionate and playful. They weigh between 14 and 18 pounds. Pugs require more energy and attention than the other dogs on this list, but they will make you feel loved, and you’ll never feel lonely with them around.

They require some amount of exercise to keep them mentally and physically healthy, so you’ll have to take them on their daily walks, but make sure they don’t engage in activities that are too taxing because they can develop breathing and eye problems. You also have to make sure that they don’t eat too much, because they can gain weight quite easily.

Pugs have short hair, so they don’t require too much grooming, but they’re not hypoallergenic. Pugs are great for seniors who like to stay inside their house because they’re laid-back, and they easily get along with other people because of their people-pleasing nature.

Known for being friendly towards humans but a bit aggressive towards other dogs, the Miniature Schnauzer is great for seniors who live with other people and have their family visiting them often. They’re hypoallergenic, and they weigh between 11 and 20 pounds.

The downside to having a Miniature Schnauzer is that they require a lot of grooming because they have a “double coat.” The good thing about having a double coat is that these dogs don’t shed too much.

The Miniature Schnauzer loves to play with their owners, so you will need a tiny amount of energy to spend time with your furry friend. They enjoy playing a game of fetch, and they’re easy to train. The best thing about them? They have a very fashionable mustache, which the kids in your family will find adorable!

A small Belgian breed that looks like a fox, the Schipperke, weighs about 16 pounds, and they make excellent watchdogs. Their name is Flemish for “little captain.” Historically, they were raised as ratters and watchdogs, so those are the things they’re best at. Catching rats and keeping you safe.

They like spending time with their owners, and it can be a bit tricky to train them, but you can easily find an experienced trainer to help you with that. They have an infinite amount of energy, and they will be willing to do whatever you make them do.

Being small means that they’re fast, so if you’re planning to take them outside, you should probably keep them on a leash. You don’t want them running towards other animals across a busy road. The Schipperke will keep you motivated to get out and get some exercise because this little devil is a curious creature, and they’re always up to something.

The Maltese weighs about seven pounds, so they’re easy to carry – you can take them anywhere in your bag! They’re hypoallergenic, and they live for about 15 to 18 years. They’re highly receptive to training, and they’re affectionate towards their owners, so you can snuggle with them as much as you want.

They’re prone to health issues like glaucoma, liver problems, and “shaker dog syndrome.” To make sure you don’t end up with a Maltese who suffers from issues like that, you should be meticulous and thorough when doing research on which breeder you should select.

They require a moderate amount of grooming, but they shed very little if you clip their hair short. Take them to a groomer at least once a month, and you should be fine. They don’t require a lot of exercise since they were historically bred as lapdogs, and they won’t mind spending most of their time just sitting on your lap inside your house.

They weigh between 3 and 6 pounds, making them the lightest and smallest breed of dog in this list (they’re also the smallest breed in the world). They live up to 18 years, and they’re one of the most portable dogs in the world. They require a minimal amount of exercise, so you won’t have to feel guilty about spending too much time cuddling them!

They’re not hypoallergenic, and they have small bladders because of their tiny size, so make sure you have a litter box in the house where they can quickly relieve themselves. They get nervous easily because of which they sometimes bark a lot.

They’re loyal towards their owners, and they love being inside just as much as they like being outside. They’ll keep you entertained with their quirky personality, and you’ll never get bored. Another great thing about them is that you won’t have to take them to the groomer, and they don’t require regular bathing because it can remove the natural oils from their coat.

All in all, having a small dog is a great way to feel less lonely when you’re old. They encourage you to go out and exercise regularly. We all know that there’s nothing better than having a furry friend with you while you’re exercising.

The dogs mentioned in this list are easy to carry, and most of them will fit in your bag. Which one you should get depends on your activity level, how much time you’re willing to spend with your new friend, and whether other people are living with you or not.

Most of these dogs are hypoallergenic and have minimal exercising and grooming needs. They’re low-maintenance and easy to train. You’ll have to take them on a walk every day, but other than that, there’s not much you’d be required to do. Some of them are friendly towards other people and animals, some aren’t, so you have to keep that in mind, especially if there are other people living with you or your family visits you regularly. Your retirement will be much more enjoyable and fulfilling when you have a furry companion by your side!