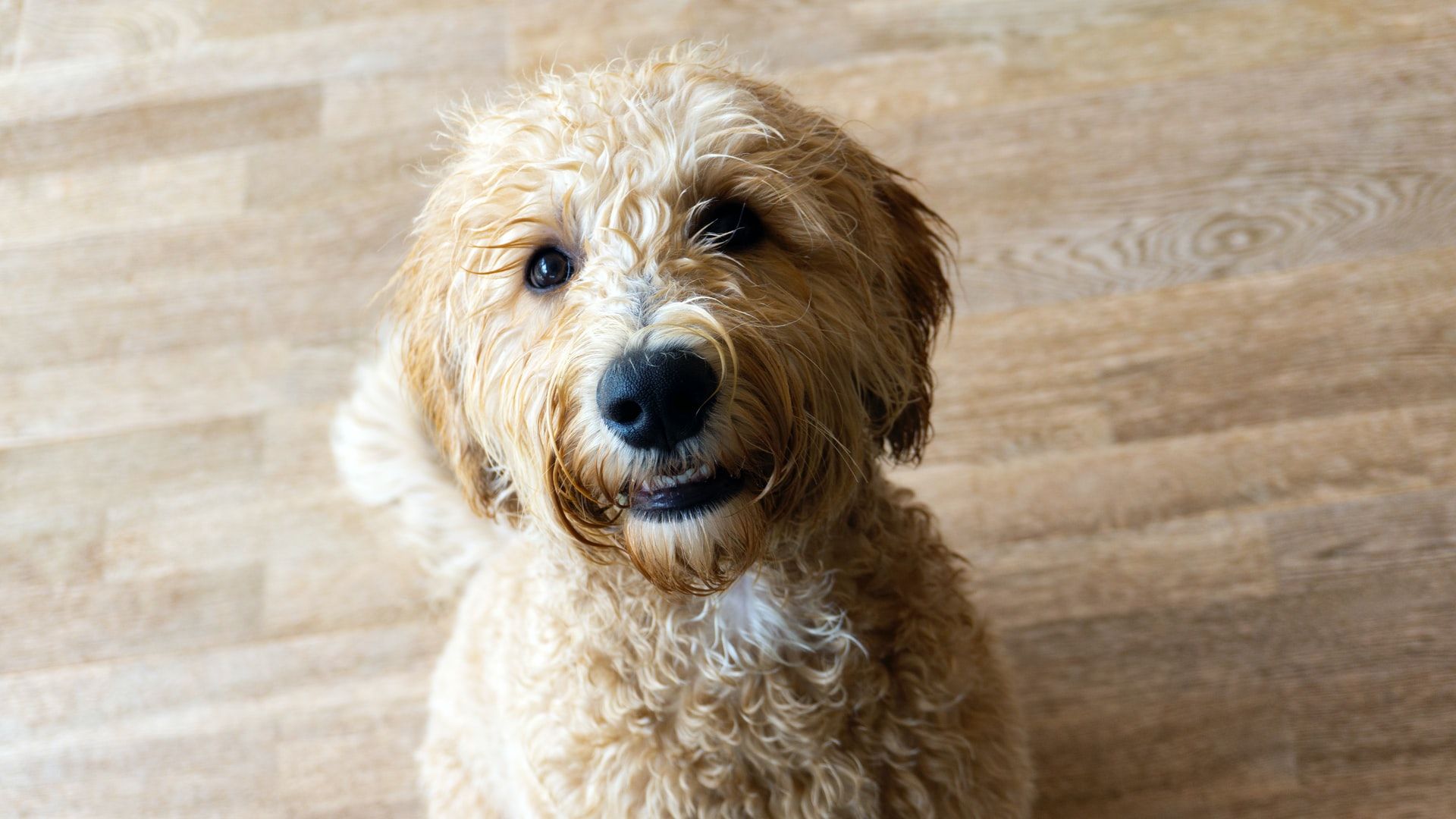 Many are curious about the Mini Labradoodle. This adorable pup is a fairly new breed that has skyrocketed to being one of the popular dogs.

The History of the Miniature Labradoodle

The Miniature Labradoodle is one of the size options of the Labradoodle. The Labradoodle was first developed in 1989 after Wally Conron successfully crossbred a Labrador Retriever and a Standard Poodle in Australia. The hybrid was considered a success because the pup was hypoallergenic and carried all the best personality traits of each parent breed.

Due to being a crossbreed, the Miniature Labradoodle does not qualify as an official breed to this day, according to the American Kennel Club. However, many Labradoodle enthusiasts have been pushing for a movement for the Labradoodle to be considered a certified breed. It may not be certified, but it is recognized by various international Labradoodle associations.

Miniature Labradoodles might have a smooth coat like a Labrador Retriever or a curly hypoallergenic coat like a Miniature Poodle. With a first-generation litter, you’re never going to know what you’re going to get.

Miniature Labradoodles can have one of seven coat colors, including black, blue, brindle, cream, red, and silver. They can also have either hazel or brown eyes and a black or brown nose. Their eyes are very round and expressive, and sometimes they almost resemble a person, making it easy to tell what mood they’re in.

The 6 different colors of a Miniature Labradoodle:

The Personality of the Miniature Labradoodle

As mentioned earlier, what made the Miniature Labradoodle so popular is its pleasing personality. Miniature Labradoodles are cheerful, affectionate, and intelligent dogs. These dogs have such a calm nerve that it can be therapeutic for owners that come home from a rough day or even those that struggle with their mental health.

However, the personality of your Mini Labradoodle will depend on how you socialize your pup. Depending on how much interaction they get, a Mini Labradoodle can become a very cheerful dog. They’re relatively energetic dogs, so they regular playtime with people or other dogs.

If you socialize your Mini Labradoodle to be the active type, it will bring out the most of their energy. Playful Mini Labradoodles have the tendency to be overzealous. They can become the type to knock over vases or even toddlers at home. So if you want a cheerful Mini Labradoodle, make sure that your home is safe for both your dog and your children.

Mini Labradoodles are also highly intelligent and empathic, which is what makes them such good guide dogs. They’re able to understand humans much better than most dogs do, and it’s believed that they can even tell when you feel sad or distressed. Many breeders recommend Mini Labradoodles for pet owners with family members that may have learning or social disabilities because this breed is a guaranteed friend.

Take Care of a Miniature Labradoodle

This next section of the article will cover the different points of taking care of a Miniature Labradoodle. You will have all the information that you need when it comes to grooming, feeding, dental care, and exercise.

The good news is, the Miniature Labradoodle does not require much maintenance when it comes to grooming. This breed is a hypoallergenic one, so maintaining their coat simply involves brushing them once or twice a week.

However, how much this breed sheds will depend on what type of coat it has. A Miniature Labradoodle can have one of three coat types: hair, wool, and fleece.

Miniature Labradoodles with hair-type fur tend to shed often and will need to be brushed more regularly. If they have wool-type hair, then they probably won’t shed at all and even avoid catching any bad odors. Fleece-type fur is silky and lies somewhere in the between hair-type and wool-type fur in terms of shedding amount.

Since Mini Labradoodles have ears that droop down, they will need to have them cleaned regularly. If left unclean, their ears can develop inflammation that leads to nasty infections. An excellent way to know if your dog is having ear problems is by checking them weekly for dirt, redness, or an unpleasant smell. You can clean your Mini Labradoodle’s ears by dampening a cotton pad with an ear cleaning solution and wiping it across their ears once a week.

When it comes to their nails, Miniature Labradoodles will need to have them trimmed every six to eight weeks. Since they’re not very active dogs, their claws are prone to overgrowth, and you will have to either cut them yourself or take them to a groomer to have them trimmed.

Mini Labradoodles do not need to bathe often. In fact, they only need to be washed when necessary. Unless your pup spends a lot of time outdoors and plays in puddles or muddy ground, you won’t have the need to give your Mini Labradoodle a bath at all.

The recommended amount for feeding a Miniature Labradoodle is 1 to 2.5 cups of quality dry food a day. If you intend on mixing their meals with wet food or homemade food, you can lessen the amount of dry food that they have.

A good way to tell if your Mini Labradoodle is eating too much or too little is by conducting the eye test and the hands-on test. The eye test is looking down at your dog and checking if you can see their waist. The hands-on test involves gently pressing down on your dog’s side with both hands to see if you can feel their ribs.

It’s also a good idea to divide their food into two meals a day, one in the morning and one in the evening. This is to prevent them from bloating or gastric torsion. Having one large portion a day can give your puppy an upset stomach and, in worse case scenarios, vomiting or diarrhea.

Dental care for Miniature Labradoodles is fairly simple. You have many options for keeping your dog’s teeth and gums clean. The most basic path to take is by brushing their teeth at least twice or thrice a week. You will have to use dog-friendly toothpaste that you can purchase at any pet store or veterinary clinic.

If your dog isn’t a fan of toothbrushes, you have the option of using enzymatic paste. The enzymatic paste is formulated to taste like a treat for your dog. While your dog enjoys a new treat, the enzymes in the formula work to get rid of any nasty tartar or dirt in their teeth and gums. However, it may not be able to eliminate any odors that your dog’s breath might have.

Another option is to purchase veterinary dental tablets. Various brands offer their own tablets that are made for doggie dental care. All you have to do is drop a tablet in your dog’s water bowl once a week, and it’ll help keep their teeth and gums clean and their breath minty fresh.

A good way to keep your Mini Labradoodle physically exercised is by taking them on walks or trips to the dog park. Mini Labradoodles prefer to play in the outdoors because they love experiencing new sights and smells. These dogs love to be outside and love it, even more so when they’re out with you.

Since they are intelligent dogs, Mini Labradoodles will also need mental stimulation. If you don’t test their brains every now and then, they can develop aggressive behaviors like scratching or chewing on things around the house.

You can also dedicate some time in your day to training your pup to learn new tricks. It’s good to start with simpler tricks like sitting and waiting, then eventually work your way up to more complex tricks like fetch, playing dead, or agility courses. Thanks to their intelligent traits, a Mini Labradoodle can learn just about anything that you have the patience for.

Having allergies is the most common health issue that Miniature Labradoodles can suffer from. Allergies can be caused by a number of things, specifically food allergies, contact allergies, and inhalant allergies. Usually, these allergies have the same symptoms: excessive itching, sneezing, inflammation, redness in the skin, and skin sores.

Food allergies are caused by the food that your dog eats. A common type of food that causes allergies in dogs is chicken. A food allergy can easily be prevented or remedied by changes in your dog’s diet. You might want to veer away from dry food that has chicken as an ingredient because if your dog is allergic to it, it can develop skin sores. A safer option is going with dry food that has a lamb and rice formula, as not a lot of dogs are allergic to lamb.

Your Miniature Labradoodle can get contact allergies from the products that you use to groom them. Certain dog shampoos and flea powders can contain certain chemicals that can irritate your dog’s skin. Generally, choosing mild or organic grooming products can prevent contact allergies.

Inhalant allergies are allergies that are caused by airborne agents. Your dog might be allergic to dust or pollen, just like people. You can prevent your dog from suffering from inhalant allergies by regularly vacuuming your home or purchasing an air purifier. It’s also a good habit to keep your Miniature Labradoodle away from flowerbeds or plants that they aren’t used to.

Unfortunately, Miniature Labradoodles are also prone to Diabetes Mellitus, or Diabetes. Diabetes is a bodily disorder that makes a dog’s body unable to correctly process sugar. Dogs with diabetes normally have stronger appetites because they are trying to make sure that their body is able to absorb enough sugar to process.

Diabetes can cause fluctuations in your dog’s weight, excessive urination, increased appetite, and extreme thirst. If you suspect that your Miniature Labradoodle might have diabetes, it’s best to take it to their veterinarian so that they can give your pup the proper treatment. Treating Diabetes involves changes in diet and administering Insulin.

You can tell that your dog has an ear infection if its ears are red or inflamed and have a pungent odor. Luckily, this is one of the easiest health conditions to treat. As mentioned in the grooming section of this article, all you’ll need to do is clean your dog’s ears regularly.

This is, unfortunately, a common condition that tends to occur when your Miniature Labradoodle gets older. Unlike other health issues, Hip Dysplasia can be difficult to notice or diagnose. Some dogs show outward signs like limping in one or both of their hind legs, while others don’t show any symptoms.

If left untreated, it can further develop into dog arthritis, which causes even more pain in the dog’s body. Treating Hip Dysplasia can be quite expensive because the only existing treatment for it is surgery. This is why reputable breeders refuse to breed dogs that have Hip Dysplasia. It is harmful to both dogs and their owners, and dogs with Hip Dysplasia should not pass those genes down.

To match their interesting history, the Miniature Labradoodle has just as interesting looks and personalities. Their popularity can easily be credited to their adorable size and build and their natural talent for being cheerful but therapeutic guide dogs.

Not only do Miniature Labradoodles look adorable, but they act like it too. These dogs are natural companions and are sure to make anyone fall in love with them. But with all these perks also come some flaws, primarily in the health department. It’s easy to love a Miniature Labradoodle, but it can be hard to take care of one. It’s important to remember that with enough love, care, and attentiveness, you and your Miniature Labradoodle can overcome anything.