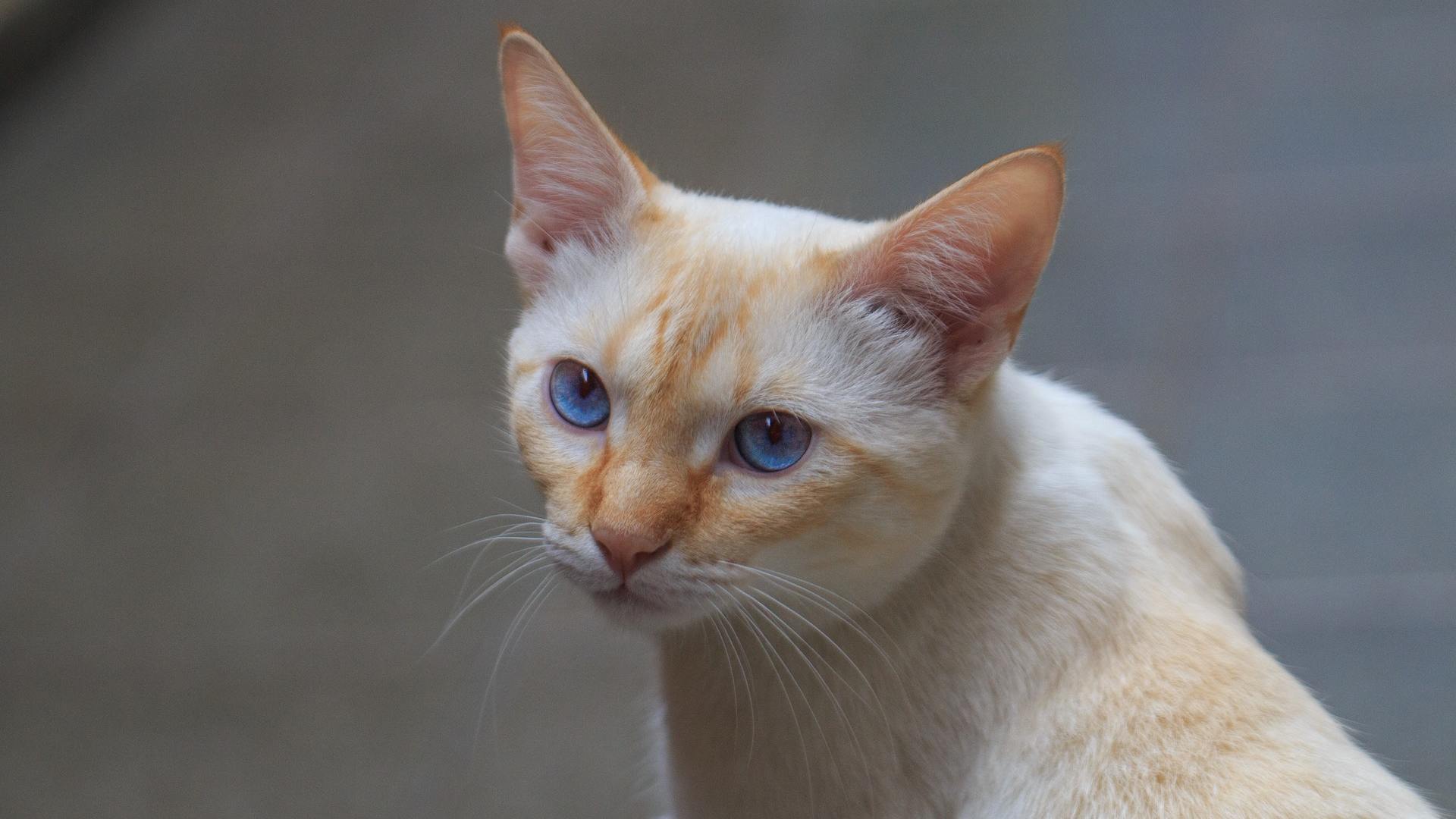 The talkative, affectionate, and attention-loving Flame Point Siamese is one of the rarest Siamese hybrids. Find out more about the cat here!

In this article, I’ll talk about everything there is to know about the Flame Point Siamese. If you’re looking to have one of your own, then this is the perfect place to start. I’ll start with the breed’s history and how it was developed. Then I’ll describe what this breed looks like and its personality as a house cat. Finally, I’ll talk inform you on how to take care of a Flame Point Siamese and the common health problems that this breed can have.

The History of the Flame Point Siamese

The Flame Point Siamese is one of many Siamese hybrids that were developed to create color variations of the Siamese’s famous point markings. The Siamese’s points are on its face, tail, legs, and ears, which contrast a cream or white-dominant coat.

A Siamese’s points are usually solid colors but when cat breeders realized that they could have other point colors, more and more Siamese hybrids were made. The Flame Point Siamese was one of these hybrids and came into the breeding world in the 1930s. This breed had to go through multiple generations of selective breeding to successfully achieve the color consistently.

To this day, the Flame Point Siamese is incredibly rare. However, the breed is adored by cat-lovers from all over the world because of its unique and charming appearance.

How the Flame Point Siamese Looks

Now it’s time to get into the most interesting feature of the Flame Point Siamese. These cats are so rare that some people believe that they don’t even exist. Let alone know what they even look like. Luckily, this cat is easy to identify because it has a look that is unique to this hybrid. In the following sections, I’ll discuss the Flame Point Siames’s appearance, size, and coat.

The Flame Point Siamese has all the physical features of a Siamese cat but with different color markings. It has a dominantly white or cream-colored coat with ginger markings on the face, ears, and paws. It also has a ring-striped orange tail.

In terms of its build, the traditional Flame Point Siamese has a body that looks similar to a regular Siamese. It has a sturdy but slim build. Flame Point Siamese cats aren’t particularly athletic but they do have strong muscles. They have squarish bodies and dainty paws at the end of their medium-length legs.

The traditional Flame Point Siamese has an apple-shaped head and small pointed ears on either side. On its forehead, it has a distinct “M” shaped orange stripe that it inherits from its ginger genes. This cat has oval-shaped eyes that have a bright blue color.

Modern Flame Point Siamese cats have a different facial structure and build. They typically have wedge-shaped heads with a regal expression. Their eyes are almond-shaped and sit on top of a sharp nose and triangular chin. They also have longer limbs and a thinner body. Although the modern version of this cat has a more extreme look, they still qualify as Siamese cats.

The Flame Point Siamese is an incredibly rare cat. This breed’s rarity can be attributed to two things: the ginger gene and breeders.

First I’ll discuss how the ginger gene affects the cat’s rarity, later, I’ll cover the breerders role in this cat being as rare as it is.

You might have heard that most ginger cats are male. This is true because of certain rules that apply to cat’s coloring genes. A lot goes into deciding whether or not a cat will have red fur. The ginger gene is responsible for producing red pigments in cats. It is a dominant gene and tends to dominate other color genes.

Flame Point Siamese owners claim that this breed can be weird and eccentric. They can do unusual things like bumping into furniture, meowing for attention, and dominating other animals in the household. The Flame Point Siamese is definitely an exciting cat to have!

Since the Flame Point Siamese is a shorthaired cat, it will only need to have its fur brushed once a week. These cats are great at grooming themselves so you’ll mostly be helping them with their shedding. Flame Point Siamese cats usually go through two shedding seasons a year which normally happen around spring and fall. During these times, your Flame Point Siamese will need to be brushed thrice a week.

Like most Siamese cats, the Flame Point Siamese is prone to having traces of poop stuck on their butts. They often forget to clean that part of their body after they’ve taken a trip to the litter box. To keep your cat from leaving traces of feces on your furniture, simply wipe their butt with a dampened piece of tissue after they poop.

Flame Point Siamese cats don’t need to be bathed often as they are quite good at grooming themselves. You will only have to bathe your Flame Point Siamese as needed, such as when they seem dirty or get into a messy accident. Bathing cats can be difficult because most cats hate water. However, you can use anti-bite showering bags.

Your Flame Point Siamese will also need something to help keep its claws in check. Investing in good scratching boards or posts will go a long way. You should also trim your cat’s claws once every two weeks. You can use pet-friendly nail clippers to make sure that you do it safely. When trimming your cat’s nails, be sure to stop before the pink part that is normally visible.

Flame Point Siamese cats should be fed a mix of both wet and dry food. This is because cats can be prone to dehydration. It’s ideal that they have some fluid intake with the food so that they can stay hydrated throughout the day. Cats also need a variety of vitamins and nutrients to sustain their athletic bodies.

The Flame Point Siamese shares a lot of physical and anatomical features with a regular Siamese. This means that they share the same nutritional needs. Royal Canin’s Siamese breed-specific dry food is the best option for meeting those nutritional needs. It’s recommended by veterinarians and breeders because it’s high in protein and healthy fats.

To feed your Flame Point Siamese, you should keep their bowl filled throughout the day. Once you spot that its bowl is empty, refill your cat’s bowl again. This is because cats prefer to free eat rather than have scheduled meals. Your Flame Point Siamese is unlikely to finish its dry food in one go but will instead come back for several small meals.

If you choose to feed your cat a pure dry food diet, you should keep in mind that it is not enough. You’ll have to make sure that your cat has enough water because cats lack instinctive thirst. You can help your cat stay hydrated by using a cat water fountain. Flowing water encourages cats to drink water compared to still water in a bowl.

To further prevent any chances of your cat developing urinary or kidney problems, Purina’s Pro Plan Urinary Tract wet food formula is the best choice. It helps support a healthy immune system and provides a diet that’s low on magnesium. It’s great for Flame Point Siamese cats because they can be averse to drinking water and become prone to urinary problems.

If you’re looking for an alternative to purchasing wet food, you can also try making your own cat food. The best type of homemade food to make for your cats is a mixture of bone broth, boiled poultry meat, and boiled poultry organs.

To prepare this meal, you should start with making the broth. Start with 2 lbs of chicken bones and 2 cups of water. Boil chicken bones in water for 1 hour. Afterward, remove the bones and add 4 lbs of meat and organs in the broth for 30 minutes. Once the food is cool enough to eat, serve it to your cat.

Each batch you make can last in your refrigerator for at least 1 week. Be sure to feed this to your cat at least twice a day. The meals should be at least 6 to 7 hours apart. You can even mix in some of their dry food into the broth for extra calories. This recipe is known to provide your cat with a lot of healthy fats, proteins, and nutrients.

If it’s too much of a struggle to brush your cat’s teeth, you can also use water additives. Simply add it to your cat’s water source and let your cat drink it. Water additives will help your cat fight plaque build-up and also improve the smell of your cat’s breath.

A great way to exercise your Flame Point Siamese is by having it chase a teaser. Your cat’s natural hunting instinct is sure to be targeted by these prey-like toys. Any game or activity that gets your cat to run around is the best way to get it to exercise.

There are a few health issues that are more common to the Flame Point Siamese in comparison other cats. I’ve listed them below.

Arthritis is a common health issue that affects your Flame Point Siamese cat’s joints. It causes pain and discomfort and makes it difficult for your cat to walk. It’s caused by age, abnormal hip development, injuries, or obesity. The symptoms of arthritis include difficulty moving, limping, and low energy.

Right now, there is no cure for arthritis in cats but it can be managed. If you notice that your cat might be suffering from arthritis, it’s best to take it to the vet for a proper diagnosis. To help manage your cat’s arthritis, your vet will prescribe your cat pain medication. This is will alleviate the pain and discomfort caused by arthritis and help your cat move freely again.

Hip Dysplasia is a degenerative disease that happens in your cat’s ball-and-socket joint which is found in the hip. To put it simply, your cat’s femur develops an irregular shape that doesn’t fit properly in its socket. The symptoms of hip dysplasia include limping, difficulty jumping, loss of energy, and muscle loss in the hind legs.

Mouth and gum diseases are conditions caused by plaque and tartar buildup in your cat’s teeth. These conditions include gingivitis, periodontitis, and stomatitis. When there are too many bacteria in your cat’s mouth, it can eventually lead to more dangerous health issues.

Perhaps it is a good thing that these cats are rare because it keeps them out of the hands of irresponsible breeders. I wonder what it’s like to meet one of these special cats and witness their charming and end eccentric personalities firsthand. There are only a few lucky Flame Point Siamese cat owners in the world and I wouldn’t be surprised if you wanted to be one of them.