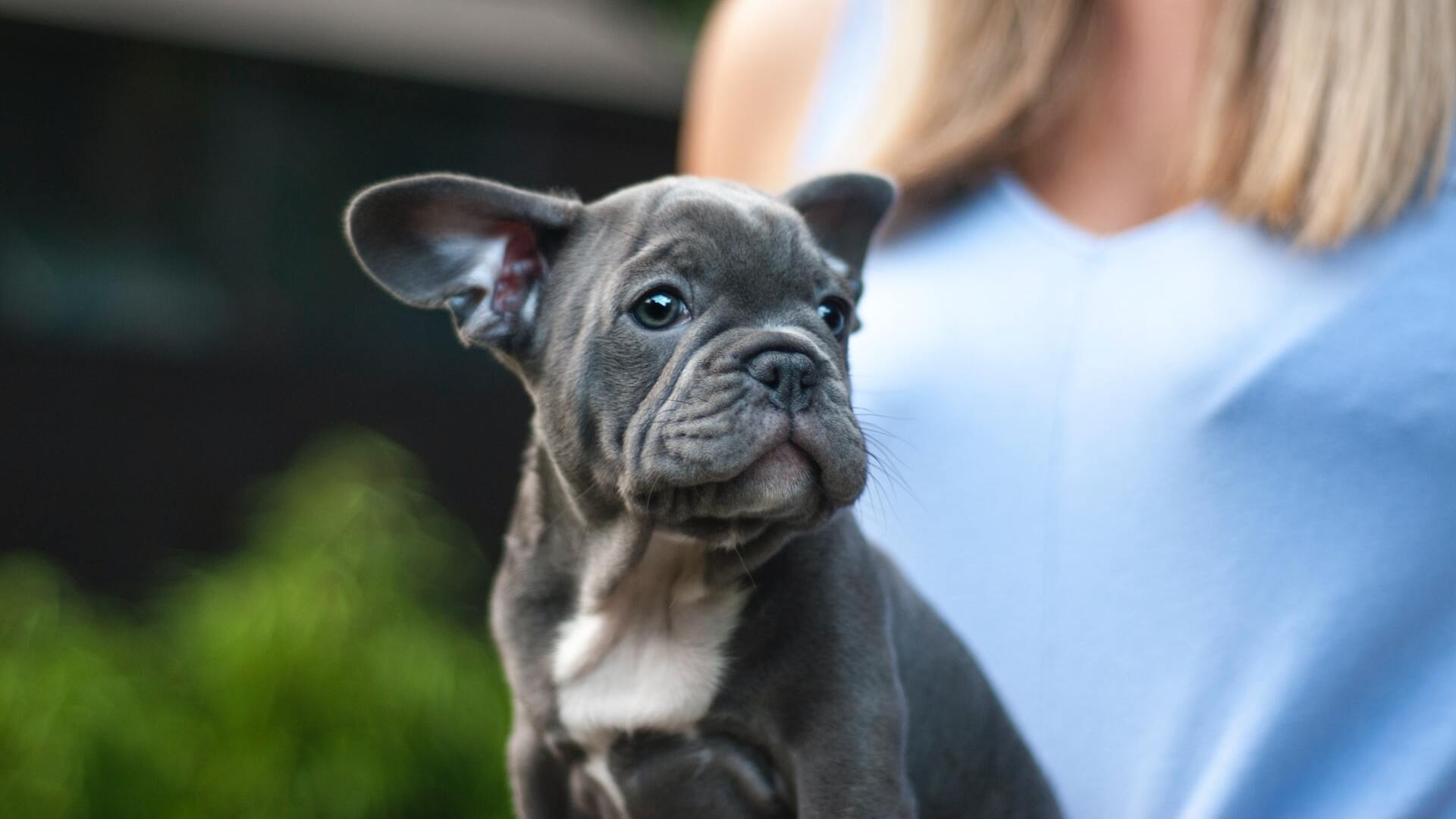 The Blue French Bulldog is a special little puppy. Find out more facts and information about this adorable dog here.

The History of the Blue French Bulldog

The Blue French Bulldog, also known as the Frenchie, was first developed in the 1800s. This breed was developed in Normandy, France to be the next best pet companion. Despite originating from breeds that were popularly used for bull-baiting and pit-fighting, the French Bulldog turned out to be a gentle and affectionate dog.

Thanks to a dilute gene, the Blue French Bulldog has a unique bluish-gray coat color. Some believe that this gene also leads to health issues, which is a common misconception. This misconception comes from a condition called Color Dilution Alopecia (CDA). CDA is a condition wherein a dog is prone to losing its fur and it is known to be prevalent among Blue French Bulldog.

How Are Blue French Bulldogs Bred?

Generally speaking, French Bulldogs are difficult to breed. These dogs are special and often expensive because of all the costs and labor that it takes to produce them. Even the most reputable breeders recognize how hard it is to produce French Bulldogs.

Your Blue French Bulldog will have heavy bones and an inquisitive or curious expression. These dogs are small and stocky with a very squarish build and face. Blue French Bulldogs have large heads with medium-size round eyes that are far apart. The Blue French Bulldog also has famously large ears which are sometimes dubbed “bat ears” because they are long and have rounded tips. Those big ears are pointed upwards and face forward, making the Frenchie look like an adorable little bat.

Blue French Bulldogs have short and wide snouts with a black nose on the tip. Their jowls are thick and hang low on the sides of their mouths. They usually have a bit of an underbite that is square-shaped like the rest of their bodies. The Blue French Bulldog also has hind legs that are slightly longer than their forelegs that end with small and well-built feet. It has a tail that is short and can be rooted, but not curly, with a thick root and a fine tip.

Blue French Bulldogs are perfectly sized for travel, living in a small space, and carrying in bag-type carriers. These pups are easy to bring around which is a bonus to the fact that they’re so fun to show off.

Below are the different color combinations that a Blue French Bulldog might have:

The French Bulldog is a low-energy breed that would rather laze around and take naps than play and exercise. These puppies love to cuddle and will happily join you for any chance to sleep. Their adorable personalities match their just-as-adorable looks.

Next, you’ll be reading all about what it’s like to take care of a Blue French Bulldog. This breed is relatively low-maintenance when it comes to grooming and exercise but it does have specific feeding and dental care needs. Since Blue French Bulldogs are prone to being low-energy while having big appetites, you should focus on providing your puppy with a high-protein and low-fat diet to prevent any chances of it putting on too much weight. You will also get to read about what dental care needs this special puppy has.

When bathing them, be sure to use a gentle organic shampoo. It’s best to use shampoo on its own because conditioners can contain unnecessary chemicals that can further irritate your French Bulldog’s sensitive skin.

Below is a table that compares the price of the brands of dry puppy food that you can feed your Blue French Bulldog puppy:

Below is a table that compares the price of the brands of dry dog food that you can feed your adult Blue French Bulldog:

The Blue French Bulldog is prone to mouth diseases. It’s recommended that you brush your Frenchie’s teeth at least three times a week to keep their mouth, teeth, and gums healthy. You will also need to take your puppy to the veterinarian for an annual dental hygiene visit.

It has become a common misconception that all Blue French Bulldogs are born with a long list of health issues. That’s because there are countless breeders that make French Bulldogs without considering the importance of breeding healthy puppies because they’re focused on making a profit. Reputable breeders will argue that French Bulldogs can be healthy dog as long as they’re bred in healthy circumstances.

Below are some of the health issues commonly found in Blue French Bulldogs:

If you’re using ear wipes, simply wipe them through your dog’s ears once a day. If you’re using an ear cleaning solution, dampen a cotton pad with the solution then wipe that across your puppy’s ear once a day.

Skin Fold Dermatitis is a disease wherein an infection forms in a pocket between wrinkles in your Blue French Bulldog’s skin. This is common among dogs with wrinkly skin including the Blue French Bulldog. These pockets can get moist and warm which is why they’re prone to bacteria forming and developing infections.

The symptoms of skin fold dermatitis include odors coming from the skin folds, redness between the folds, swelling, and excessive itching. It’s perfectly fine for a dog to have yeast and bacteria in its skin, but it becomes a problem when the bacteria overgrows.

Treating your Blue French Bulldog’s skin fold dermatitis will depend on its severity. If it is a mild case, your veterinarian will clean the skin using a special solution for skin fold dermatitis. They will probably also recommend that you use anti-microbial shampoo or saltwater when bathing your dog.

You can prevent skin fold dermatitis from happening to your dog by keeping it clean and cool. Your French Bulldog becomes more prone to skin fold dermatitis during the hotter seasons and you can help by making sure your dog is always in a cool place or stays in an airconditioned space. You can also keep their fur clean by keeping them away from dirt and washing them with treatment shampoo.

Brachycephalic Syndrome is a condition wherein a dog experiences difficulty breathing because of the anatomy of its head and muzzle. This is common in dog breeds with short muzzles and flatter heads and this includes the Blue French Bulldog.

The symptoms of Bracnycephalic Syndrome include noisy breathing, gagging, low energy, blue tongue, and collapsing. You can tell that your Blue French Bulldog has this condition if it has difficulty breathing or shows signs of being overly lethargic even when not exerting much physical effort.

Diagnosing Brachycephalic will involve conducting a physical exam. Your veterinarian should be able to tell that your dog has Brachycephalic Syndrome based on the structure of its palate and nose. During this physical exam, your dog will have to be administered anesthesia to make sure it’s asleep during the procedure. This will allow your veterinarian to get a good look at its facial anatomy.

Treating this syndrome will involve surgery to correct the abnormalities in your dog’s airways. Your veterinarian will stretch out its palate and remove any excess tissue that’s making it hard for your dog to breathe.

The Blue French Bulldog is the perfect companion pet because of its small size, low-maintenance grooming needs, and friendly personality. This puppy is relatively easy to take care of and will treat you like you are the light of their life. However, whether or not it’s humane for the breed to exist is often brought into question because of how difficult it is to reproduce French Bulldogs.

You should and must have a Blue French Bulldog puppy that comes from a reputable breeder because this will ensure that your puppy lives a long and healthy life. If you’re looking into getting a Blue French Bulldog, you should do research and see if you’re prepared to have this wonderful dog in your life.