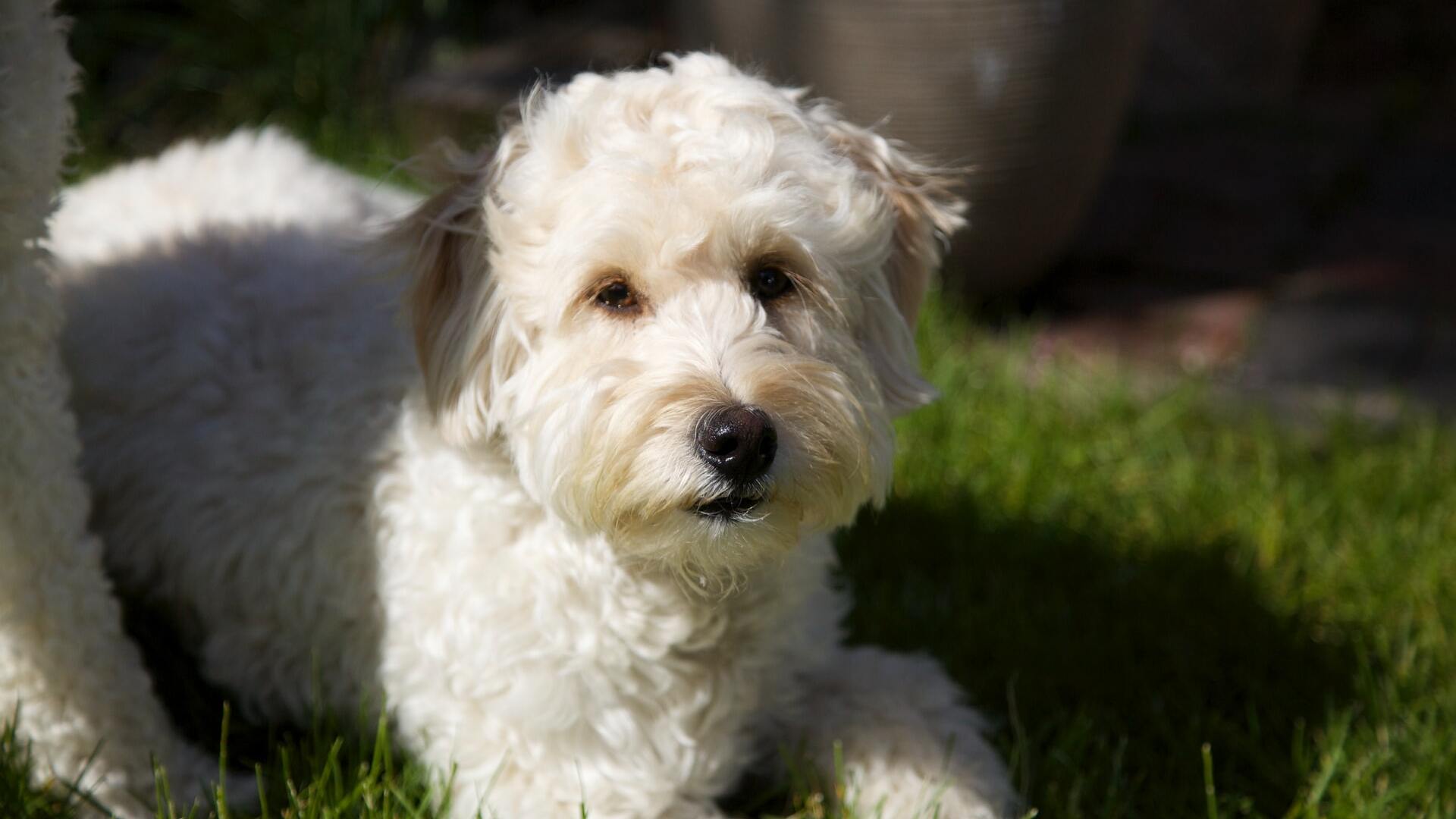 Thinking About Getting an Australian Miniature Labradoodle? Here you will find out more about this highly intelligent, and friendly breed.

Being a mix of several other breeds, the Australian Miniature Labradoodle is highly energetic and friendly. They usually come in shades of brown and weigh up to 25 lbs. With a little patience, these eager to please dogs will become highly trained and a great addition to your family.

An Introduction to the Australian Miniature Labradoodle

One of the Australian Miniature Labradoodle’s most striking personality trait is its cheerful temperament, which can be easily observed with their typical jittery jumps when they’re happy. One thing to note is that since they were bred to be a non-aggressive breed, and if they’re being raised with lots of care and attention, they will be very relaxed overall, and a great dog companion for most environments.

A Brief History of the Australian Miniature Labradoodle Breed

The Australian Miniature Labradoodle originated from the breeding of the Labrador Retriever and a Poodle, and it didn’t take long for dogs of this breed to gain a lot of popularity, because of both their friendly and intelligent traits.

The Creation of the Australian Miniature Labradoodle took place in the 80s, after one woman in Hawaii, whose eyesight deteriorated, began seeking an assistance dog. However, it was supposed to be a dog that did not cause allergic reactions to her husband. After many samples of fur and various failed tests, a suggestion was made to cross a Labrador with a Poodle, which successfully solved the issue of both allergies and service dog requirements.

The first dog of this breed, a dog named Sultan, had hypoallergenic fur, good aptitude, and high intelligence, all of these being characteristics of a good service dog, which solved the previously mentioned woman’s issue. Following that, Tegan Park Breeding and Research Center included both the Water Spaniel and American Cocker Spaniel in the breeding process, resulting in what we know today as the Australian Labradoodle.

The Australian Miniature Labradoodle is the smallest out of the three size ranges of the Australian Labradoodle breed: Miniature, medium, and standard. Its weight can vary from 15 to 25 lbs (7-13kg) and has a size range of 14 to 16 inches (35-42 cm).

The Australian Miniature Labradoodle can present many different colors, which are listed below:

One thing you should keep in mind is that the color of an Australian Miniature Labradoodle puppy isn’t an indication of the color he will present once mature. One of the characteristics of this breed is that its color can change over time, usually before they reach three years old, so it’s good to keep in mind that you might not be getting what you’re choosing.

Regarding its fur: Here are the three coat types of the Australian Miniature Labradoodle:

Traits of The Australian Miniature Labradoodle

Dogs of this breed are extremely adaptable, and although they can live a happy life in almost any environment, raising them in apartments are not recommended, since they’re highly energetic and need a minimum space for them to run, play, and spend their high levels of energy.

Being very affectionate, the Australian Miniature Labradoodle is friendly towards kids and dogs from different breeds, having a regular need for socialization. Also, since they’re extremely sociable, they will befriend strangers, which, along with their low tendency to bark and not being a territorial breed, makes them terrible guard dogs, so, if you were hoping they would do guard duty, they aren’t the breed for you.

Being creatures with a high level of intelligence, Australian Miniature Labradoodles love to play, engage in games that can stimulate their mind, and requires extra attention in this department to thrive. If a minimum of one hour of daily exercise or so isn’t met, they can easily develop destructive behavior and make a lot of trouble. Just imagine a miniature and more agile version of Marley from Marley & Me, started getting worried? be prepared to give your fluffy pet a good amount of daily exercise if you’d like to avoid that!

Another trait of this incredible breed is its ease of learning. Since they are very eager to please their owner, they will learn a lot faster than most breeds when trained, and if you invest enough time and consistency in their training, you will be rewarded with a very well behaved and happy dog.

The temperament of the Australian Miniature Labradoodle depends on several factors like, for example, their parent’s influence. taking mostly the mother’s influence, the inherited genes, and the amount of both attention and socialization, these will be the main contributors to determining the puppy’s personality.

As previously mentioned, in general, the breed is very friendly towards everybody, especially towards their tutor, and when properly trained, the Australian Miniature Labradoodle won’t present any signs of shyness or aggressiveness. That’s why when looking to acquire one, avoid places where the dogs at the establishment bark or growl when someone tries approaching them. That might be a good sign that the breeding isn’t properly managed, and that you should maybe look somewhere else.

The Australian Miniature Labradoodle inherits its intelligence from dogs of the Poodle breed, while their disposition to work with people comes from the Labradors. Using positive training techniques, with small rewards in the form of treats or petting can make them learn tricks and commands substantially faster, and the sheer enthusiasm they display while doing these activities can also be highly entertaining and rewarding for the owner as well.

Being a hypoallergenic dog and highly attached to their carers, they are animals that aren’t recommended to those who spend long amounts of time far from home, be it extensive working periods or lots of traveling. If that is your case, the recommendation is looking for a dog breed that is more independent and can take the distance from its owner well.

These small balls of energetic and non-shedding fur demand regular exercise to spend their high amounts of accumulated energy, and it’s recommended at least 1 hour of exercise per day. This amount can vary for more in first-generation breed’s, so when the puppy parents are a Poodle and a Labrador, that daily exercise requirements can be somewhat bigger.

Aside from customary playtime, it is also recommended that the collar is removed so that the Australian Miniature can roam free and spend his energy as much as possible, which will help to avoid coming home to destroyed furniture, or expensive gadgets around the house. the important thing is following the one rule for the breed: Don’t let them get bored!

Although they are an ideal breed for working, the Australian Miniature Labradoodle is still a companion dog, so it’s not recommended to raise them outside the house, in the garden. This breed needs close affection and companionship and will feel more comfortable inside the home, near their owners. This doesn’t mean that you need to let them squeeze in under your sheets and impede your sleep, but they should be allowed to sleep at your feet, or at least close to the bed.

The ideal thing to keep in mind is that this breed needs socializing from the moment they are puppies because they are more prone to getting hurt if their stress levels are too high, especially if they’re going to have contact with other dogs. Doing this can help to avoid temperamental issues in the future.

Both adults and puppies are extremely active, so they’re going to want to play, sniff, jump and run around from the moment they start to walk, but, even for this breed excessive exercise might cause issues to occur once they get older, so it’s recommended not to let them do excessive exercise when they’re puppies.

Great activities to do with your Australian Miniature Labradoodle:

The amount of food they will need can vary a lot. It will mainly depend on its size, weight, and how active the dog is.

Regarding which dog food (kibble) they should eat, it will largely vary from where you’re located, but to find the right food for your pet wherever you are you should look for those who offer a high nutrient quality, which does not mean a lot of ingredients, but just good ingredients, and in general you should avoid dog food with a lot of ingredients with poor nutritional value. Recent research also indicates using grain-free kibble, because puppies will be able to digest them better.

A good rule to follow on the quantity of food they should eat daily is 30 calories for every pound, and it’s always recommended to take your pet to the veterinarian so that he can give a more accurate and professional look into your fluffy friend’s need.

The average Australian Labradoodle lifespan varies from 12 to 15 years. Factors that affect how long they can live to include whether their Poodle parent was standard, miniature, or toy-sized, along with diet, how much mental and physical exercise they frequently have, if they’re socializing a lot or under a lot of stress. In the case of the Australian Miniature Labradoodle, they usually live longer than the other size ranges of the breed.

Considering how long your Australian Miniature Labradoodle will live is an important factor when deciding whether to get one.

If you have kids it will be great to grow up with them and will be a mutually beneficial relationship, and the kid will usually provide a lot of attention to the dog. But, if for example you’re a bachelor, and don’t know where you will be in the next few years, you will have to consider the possibility that you’re maybe going to travel and move, and a dog can always bring logistical issues such as dog hotels, travel permits, and more.

Keeping the future in mind will help you decide if you’re in the right place to have a dog that can live a long time like the Australian Miniature Labradoodle.

Another thing to keep in mind is health issues. Acquiring a dog from unverified establishments can increase the likeliness of the dog having common genetic health issues of the breed.

The Australian Miniature Labradoodle comes with a great variety of colors of fur, eyes, and three distinct fur types, being very easy to find a combination of color and fur type that responds well to the care that the owner is willing to give to his pet.

Besides that, this breed is also highly intelligent and energetic, being ideal for people who are looking for a playful and caring pet. The Australian Miniature Labradoodles are also ideal for families that already own other dogs, or that have small children since they are very friendly and receptive, they will become good friends with whoever they encounter.

Since they are a very well known and popular breed, it is highly recommended that your new Australian Miniature Labradoodle comes from a trustworthy establishment. If you want a receptive and friendly dog it is important to search in places where dogs are well treated and accustomed to other animals or human visitors. Following the tips and tricks of this blog post, you can guarantee that you will be very well prepared to receive your new best friend in the best way possible.

Hi, I am Gabriel Eidler! My dogs are Judy, a very cute and affectionate Lhasa, and Jax, a Border Collie with massive energy that will constantly use his high intelligence to outwit us.