Skip to content
Home › Dogs › Are Dogs Faster Than Humans? 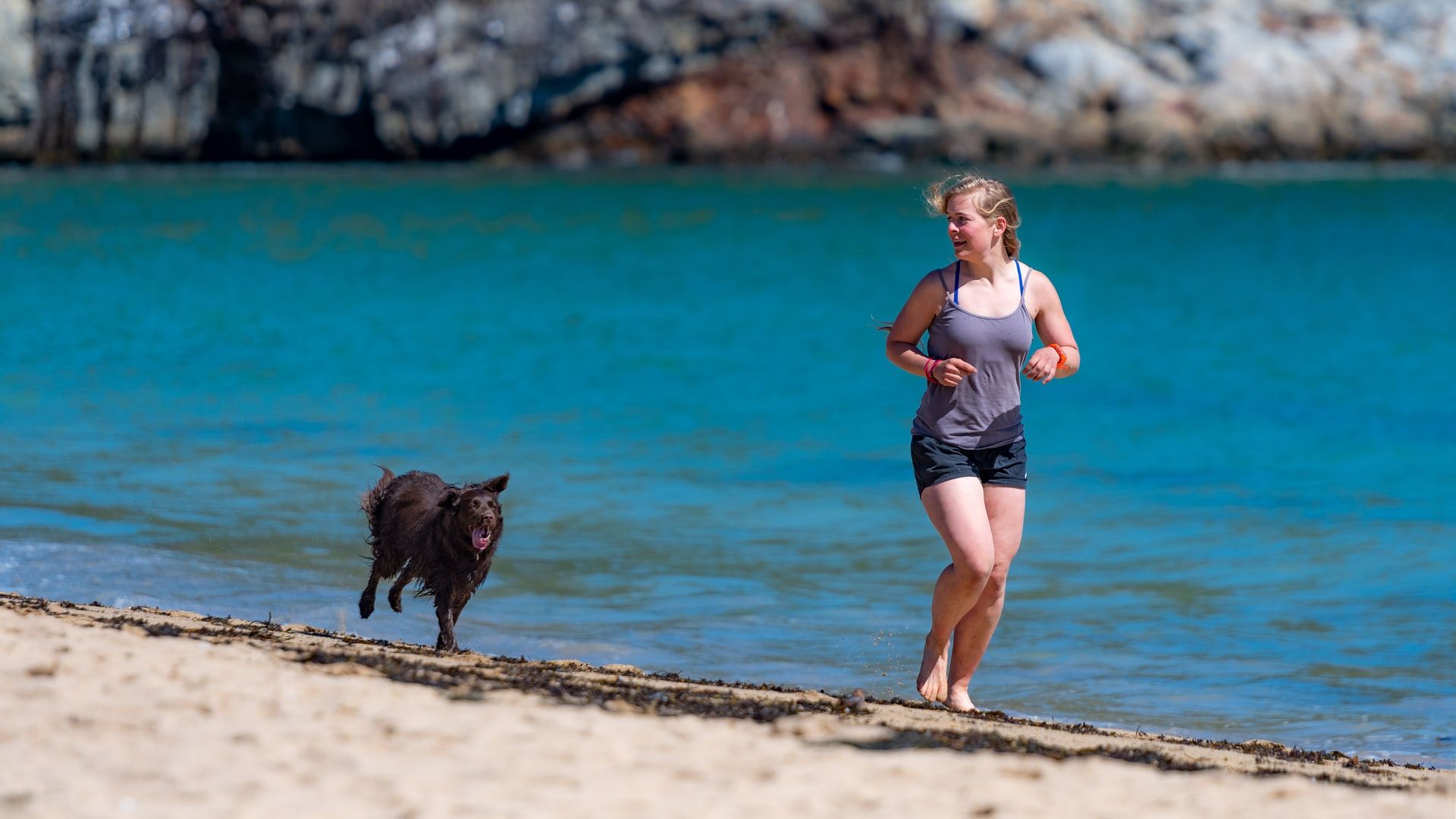 If you’ve ever had trouble catching your dog, then you know just how they run. However, can they really outrun humans? Let’s find out.

Dogs are faster than humans because of their body structure. A long and lean dog breed like the Greyhound can easily outrun a short-legged breed like the Basset Hound, but both of them will be able to run faster than you. Greyhounds are considered the fastest dog breed.

The Body Structure of Dogs

Dogs have several physical features that allow them to run at very high speeds. While there are not many dogs that can run as fast as Usain Bolt, almost all of them have the potential to outrun the average person thanks to their body structure. Generally speaking, all dogs have feet and nails that help them with turning and maintaining their “asymmetrical gait”.

Asymmetrical gait is the pattern their feet follow when they’re running – right front, left front, right hind, left hind. When most dogs run, they lift their front feet off the ground before they bring their rear feet back on the ground. Keeping their nails trimmed short is important if they run fast because nails can easily break while running and this can be painful for the dog.

Dogs that are extraordinarily fast, such as the greyhound, exhibit a “double-suspension gallop”, meaning all four of their legs are lifted simultaneously, making them airborne during each stride.

Most dogs also have a flexible spine and strong abdominal muscles which allow them to keep their body stable when they’re running at high speeds. Some of the fastest dogs have lean bodies, flat rib cages, and long and strong legs. Their paws have thick pads that let them grip any surface firmly. They don’t have a collar bone like us humans which also helps them run faster.

Dogs that are able to run fast have powerful hearts, large lungs, and nostrils which allow them to breathe in more air. This means their muscles get more oxygen which results in a higher level of endurance.

Their tails also play a part in helping them run fast. The tail acts as a counterweight to their body movement and makes sure that they don’t move in a different direction when they’re turning while running at a high speed.

Dogs can be either fast or slow depending on the breed. Below is a list of the fastest dog breeds:

The Greyhound is considered the fastest dog in the world. They can run over 45 miles per hour, not as fast as the cheetah which can run over 75 miles per hour, but definitely faster than humans. These dogs are bred for coursing games and greyhound racing. They have deep chests, big hearts (literally and figuratively), and an athletic body.

Despite being able to move at lightning-fast speeds, Greyhounds are very calm and gentle. In fact, they’re often called couch potatoes because of their calm nature. These dogs are usually retired at an early age if they get injured in races (which is common).

The only dog that comes close to being as fast as the Greyhound is the Saluki which can run at a speed of 42.8 miles per hour. Salukis have more stamina than Greyhounds and in distances that cover more than 800 meters, they can outrun them.

Vizslas almost went extinct in the early 1900s. Owing to their light but muscular bodies, they can easily run at a speed of 40 miles per hour. Just like greyhounds, vizslas are also gentle and calm dogs.

The Ibizan Hound has the same speed as the Vizsla. In the past, they were mostly used to hunt rabbits and other small animals because of their ability to move at high speeds. The Ibizan Hound also has an athletic body and a springy trot.

The Dalmatian is a medium-sized dog breed that has a muscular body that allows it to run at a speed of 37 miles per hour. Its stamina and endurance rival those of the Vizsla and the Ibizan Hound.

Another fast-running dog breed is the Great Dane which can run at a speed of 30 miles per hour. Their large size may make you think that they’re not capable of running at high speeds, but they have an incredibly athletic body, just like the Greyhound. In fact, in the past, they were used as boar hunters in Germany because of their ability to run fast.

Because of the structure of their body (deep chest, large frame), they’re susceptible to a condition called bloat which can be fatal if left untreated.

The average running speed of dogs is 19 miles per hour. Not every dog can run as fast as the Greyhound. Small-sized breeds like the Chihuahua, Pugs, and Bulldogs are incapable of running fast because of their small bodies. Pugs and Bulldogs, in particular, don’t have the respiratory system that’s needed for fast running.

Some dogs that are too large like Newfoundlands or St. Bernards can’t run fast because of their extra-large bodies. Even when they do manage to run at high speeds, they find it difficult to maintain the speed for too long because they don’t have enough stamina.

There are some dogs that aren’t fast, but they have a lot of stamina which enables them to run for a longer period of time, which means sometimes they can outrun fast dogs like the Greyhound or the Saluki.

Below is a list of the slowest dog breeds:

In conclusion, some dogs are able to run faster than humans. The Greyhound is the fastest dog in the world and it can run at a speed of 45 miles per hour. The fastest-running dog breeds have feet and nails, and they move with an asymmetrical gait. Some of them have a double-suspension gallop which allows them to be airborne twice during each stride.

They have large lungs and nostrils and many of them have extremely high endurance levels so they can run at high speeds for a long period of time. Other than the Greyhound, the Saluki, which can run at 42.8 miles per hour, is also capable of outrunning humans.

With that being said, there are many dogs that can’t run faster than humans because of their small or extra-large bodies. Small dogs like Chihuahuas and Pugs can’t run too fast because their bodies are just too small. If you have a Greyhound and you try to race it, there’s absolutely no way you’re going to win, but if you have a pug and they keep running off while you’re trying to give them a shower, you won’t have any trouble catching them.